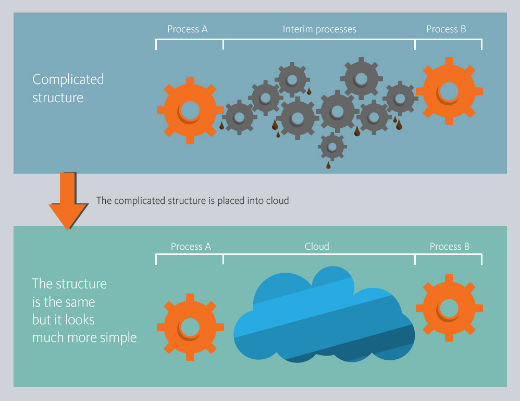 Nowadays there is a lot of hype concerning the term “cloud” in IT-world. Many horns have been locked over definitions of the word “cloud”, but rather standard one is the definition given by NIST. In a few words clouds are an abstraction level between consumers of IT-services and IT-infrastructure that enhances efficiency and manageability of these services providing.

Private Cloud – is one of cloud infrastructure subtypes that allows providing services of IT-department (or outsource IT-company) to users inside the organization. Generally such approach use one of two service models: Software as a Service (SaaS) or Infrastructure as a Service (IaaS).

Often IT-department is perceived as a wasteful department though in practice just this department provides basis for effective work of present day organization. The problem is that commonly only expenditures for IT-infrastructure are taken into account and its services cannot be counted. This fact disturbs not only IT-department for which it is difficult to prove new expenses for development and maintenance of systems but also users for which it is difficult to receive service of required quality in time. Moreover this approach results in inefficient usage of available resources.

Several cases of unfortunate situations with which organizations that do not use flexibility and manageability of cloud infrastructure can meet.

The main advantages of private cloud are following:

You can find out more about profits that can be provided by cloud infrastructure in your case by filling in this form.